My research centres on understanding the interstellar medium, or "ISM", of galaxies (the material floating in the space between stars) — what its properties are, and what it can tell us about how galaxies have changed over the history of the Universe. I especially focus on cosmic dust, and the unique window it provides onto how galaxies have developed from clouds of basic primordial gas into evolved systems — enriched with the heavy elements that go on to form new stars and planets (and occasionally astronomers). 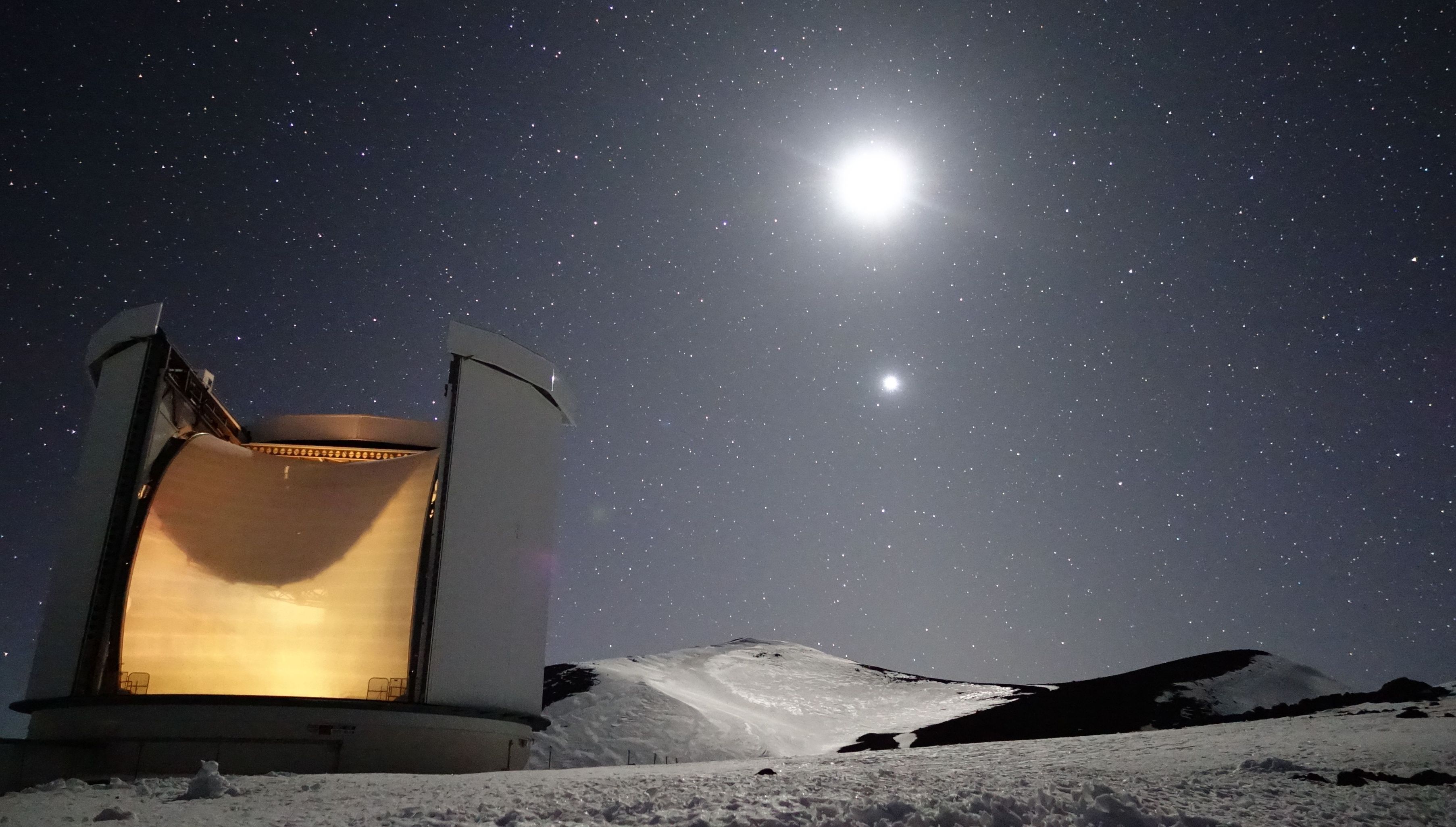 The James Clerk Maxwell Telescope, at the summit of Mauna Kea on Hawai'i, observing for the JINGLE survey during my New Year 2017 observing run (with Venus & the Moon shamelessly photobombing in the backround).

I currently work at the Space Telescope Science Institute, investigating how dust properties change within and between nearby galaxies. I'm an architect of the JINGLE large programme at the James Clerk Maxwell Telescope (JCMT), which is observing the cold ISM in a statistical sample of low-redshift galaxies. I'm also involved with the Scylla large programme on the Hubble Space Telescope (investigating the ISM and star-formation histories of dwarf galaxies); with the NESS (observing evolved stars in the Milky Way) and HASHTAG (observing gas & dust in the Andromeda galaxy) large programmes at the JCMT; and with the the IMEGIN large programme at the IRAM 30m telescope (which is using the advanced new NIKA2 camera to observe nearby galaxies at under-exploited millimetre wavelengths). I'm also a member of the EU-funded DustPedia project. 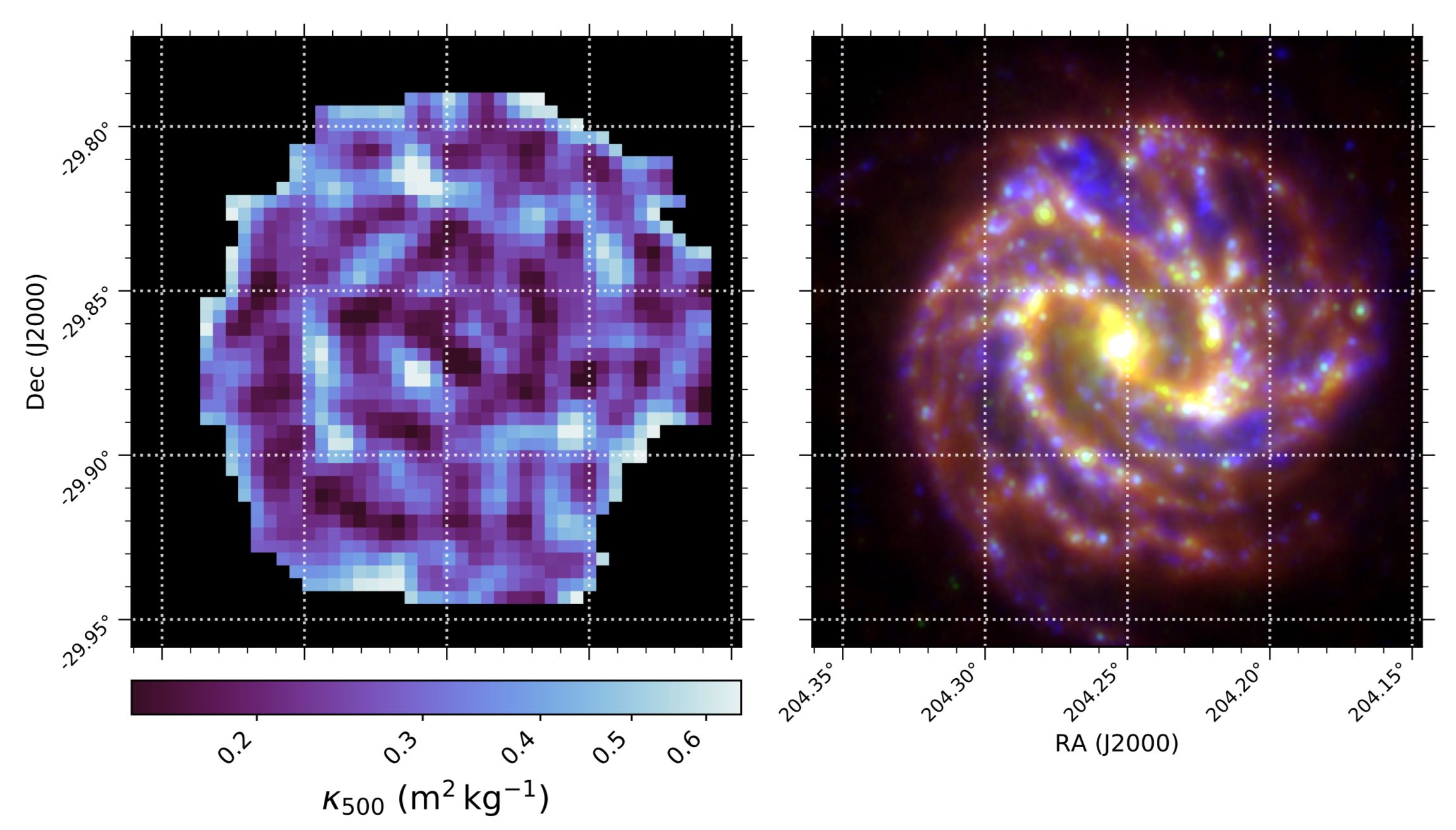 The first map of the dust mass absorption coefficient, κd, in a galaxy, for nearby spiral M83. The panel on the left shows the map of κd, whilst the panel on the right shows a multiwavelength reference image of M83 for comparison (where blue is ultraviolet, green is near-infrared, and red is far-infrared).

In 2019, I created the first ever maps of the dust mass absoroption coefficient in galaxies, showing how it varies within nearby spirals M74 and M83. The dust mass absorption coeffecient, κd, is what astronomers depend upon to calculate the actual mass of dust in a system, from observations of the dust's thermal emission. However, its value is notoriously poorly constrained, and it was previously totally unknown how it varied within galaxies. In Clark et al. (2019), we show that κd appears to be lower in regions of denser ISM - this is the opposite of what had been predicted by models, but the result cannot be avoided without making unphysical or contrived alterations to our method.

Multiwavelength imagery of DustPedia galaxy NGC 3686, showing the apertures used by the CAAPR photometry pipeline to measure the galaxy's flux in each of the 26 ultraviolet—submillimetre wavelengths shown. CAAPR performed this process for all 875 DustPedia galaxies; see Clark et al. (2017).

In Clark et al. (2018), I describe the extensive database of imagery and photometry that I created for the DustPedia project, covering 875 nearby galaxies and spanning 42 ultraviolet—microwave bands. For this, I created the publicly-available CAAPR photometry pipeline, tailored to handle the difficult task of automatically conducuting robust aperture-matched photometry for nearby galaxies. 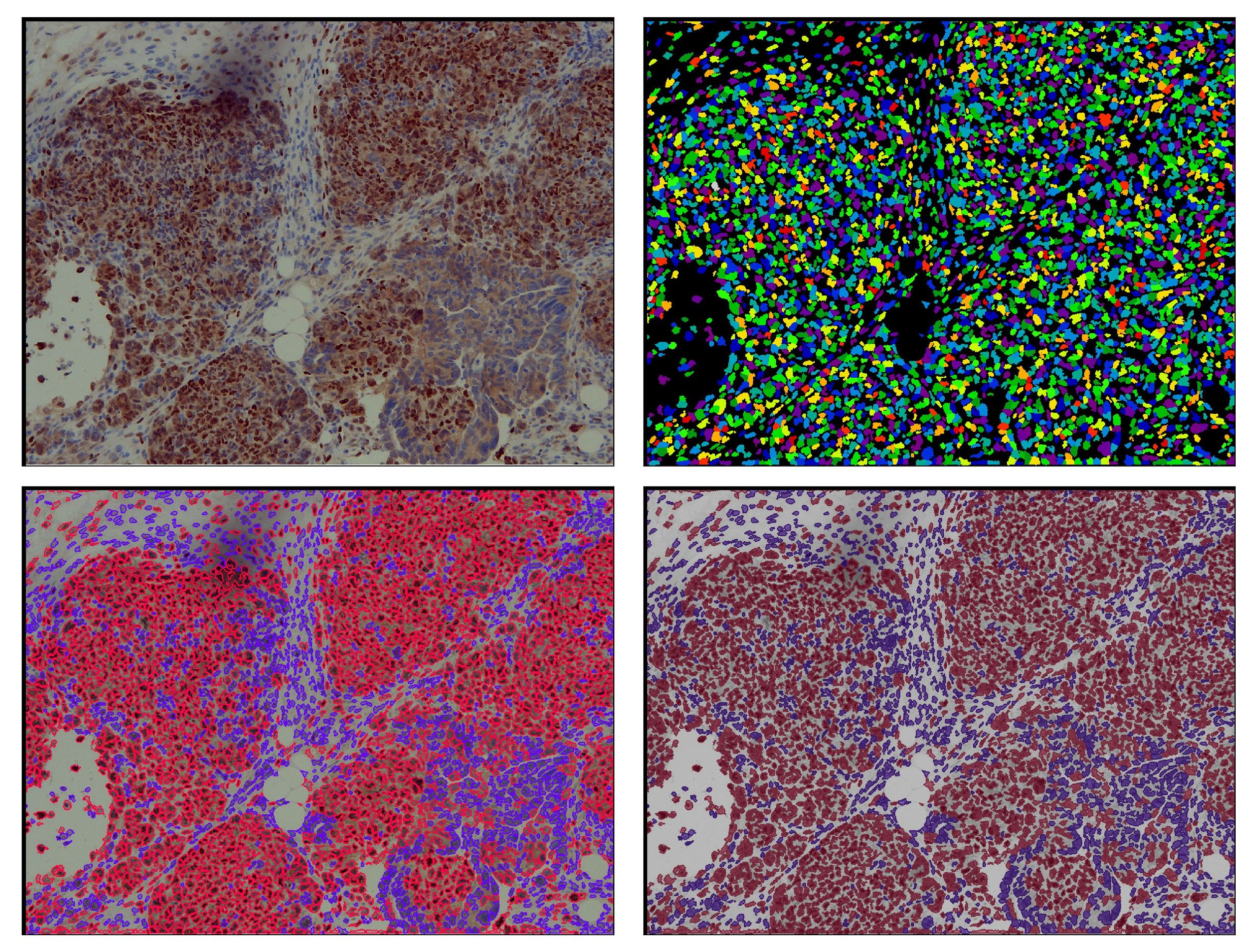 Microscope image of a liver tissue section, as processed by my AstroCell software. The original image is shown in the top-left panel, with the other panels showing the results of AstroCell automatically identifying and classifying the cells.

In 2017, I was awarded funding by the Data Innovation Research Institute to take image-analysis techniques used in astronomy, and apply them to microscope imagery of cancerous tissues, in collaboration with the School of Biosciences at Cardiff University. When studying microscope images of tissues, cancer researchers still regularly count and classify the many thousands of cells by hand — whereas in astronomy we use software to detect and analyse the stars and galaxies in our data. I worked on developing AstroCell, a user-friendly and freely-available piece of software to count and classify cells (in contrast to the complex, specialised, and typically commercial software generally avaialble). 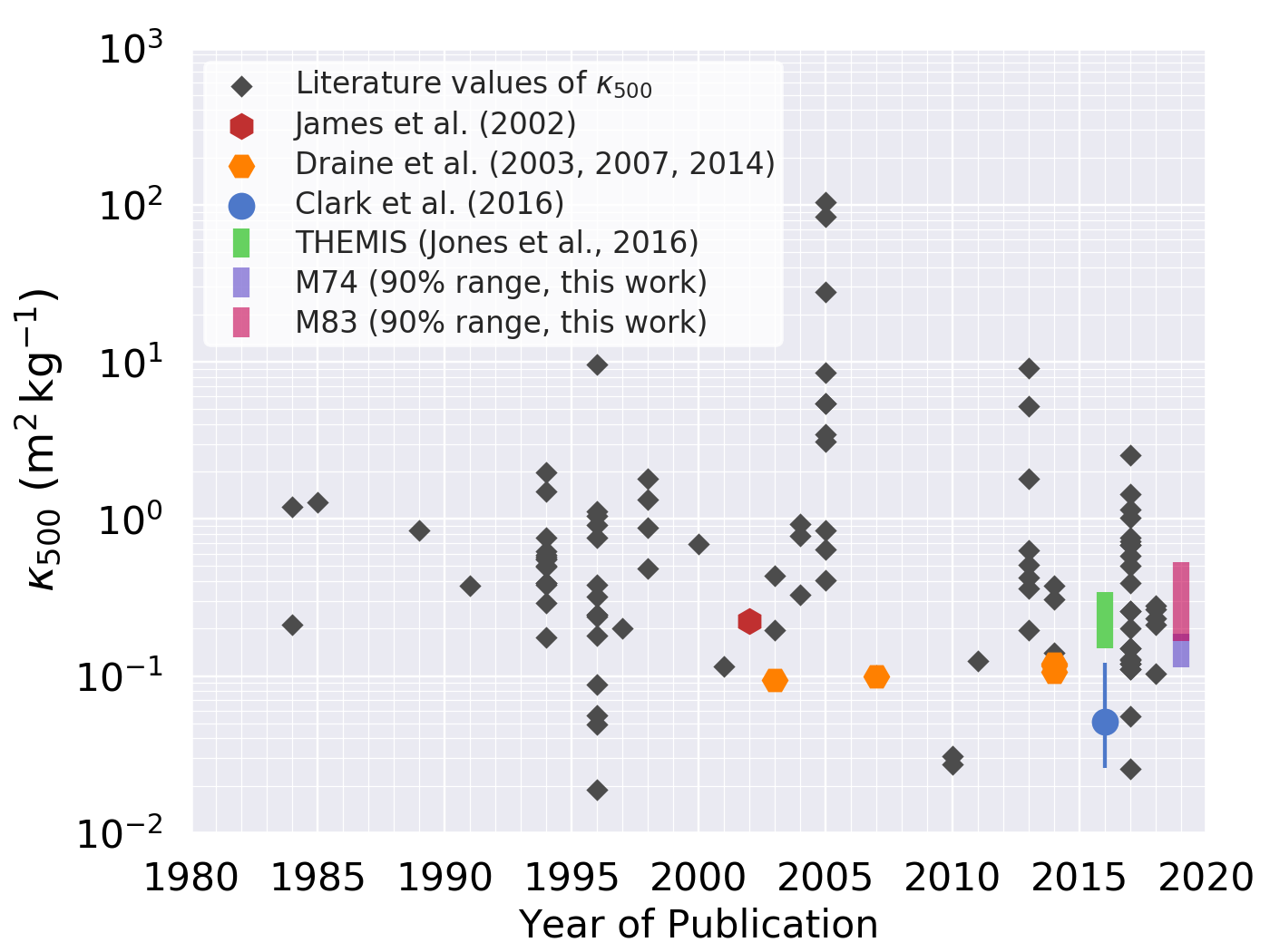 Compilation of values for κd (the dust mass absorption coefficient) published 1984—2019. This shows show poorly-constrained κd is, with values spanning over 3 orders of magnitude! The empirical value reported in Clark et al. (2016) is shown in blue. The range of values I find in M74 and M83 in Clark et al. (2019) are shown by the shaded purple bars.

In Clark et al. (2016), I used data from the Herschel Reference Survey to empircally determine a value for κd (the dust mass absorption coefficient), the notoriously-poorly-constrainted conversion factor that astronomers need to work out dust masses. By taking advantage of the fact that the dust-to-metals ratio in the ISM only shows minimal variation, I find a value of κd at 500 μm of 0.051 (+0.070, −0.026) m2 kg−1. 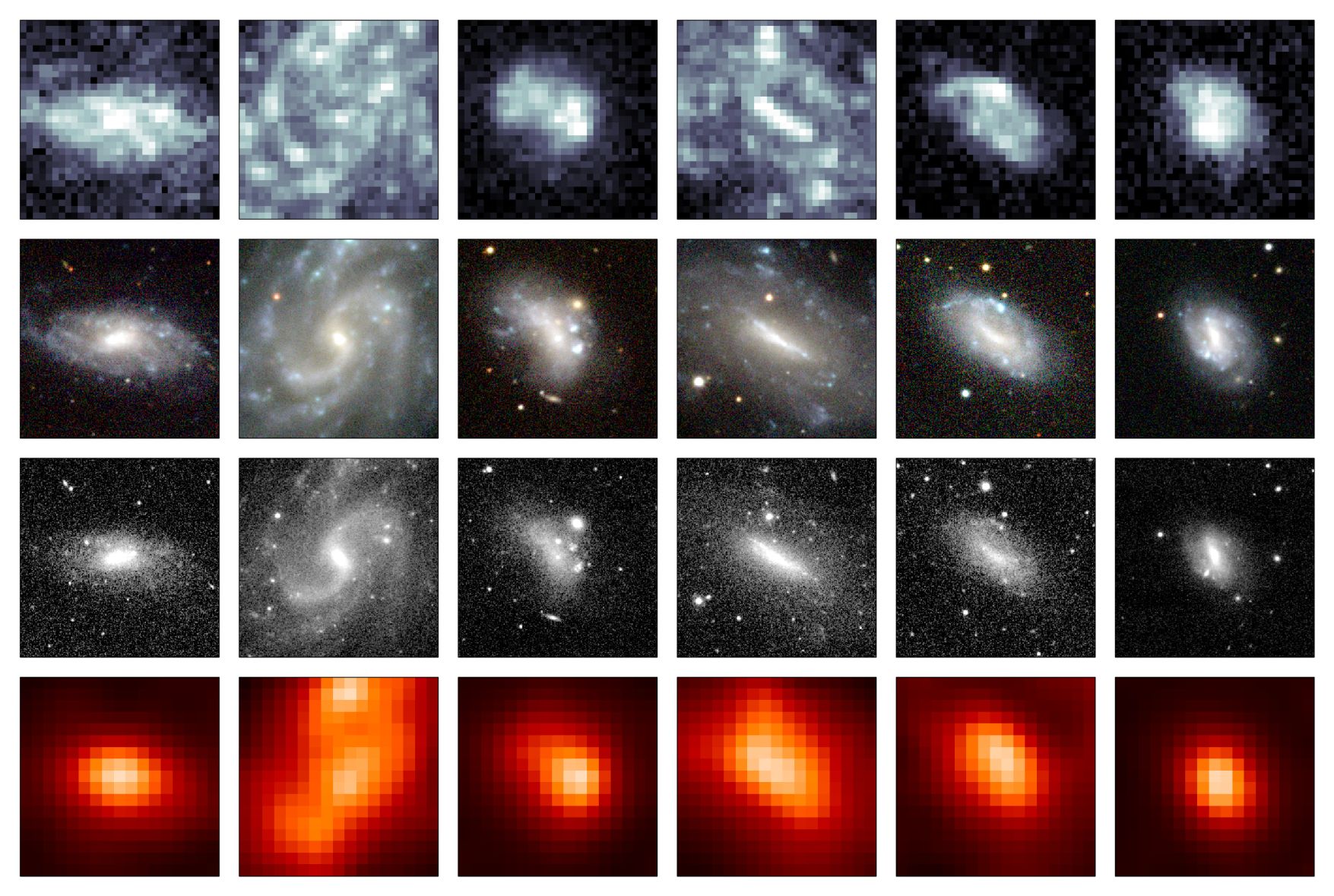 Six of the enigmatic blue and dusty gas rich galaxies revealed in Clark et al., 2015, as they appear in four different parts of the spectrum. Note their abundant star formation (in the ultraviolet, 1st row), irregular and flocculent morphologies (in the optical, 2nd row), modest populations of evolved stars (in the near-infrared, 3rd row), and dust-richness (in the submillimetre, 4th row).

For my PhD thesis (and published in Clark et al., 2015), I used Hershcel-ATLAS to create the first dust-selected volume-limited survey of nearby galaxies, providing our first unbiased view of dust in the local Universe. Unexpectedly, I found that most dusty galaxies belong to a severely under-studed population dubbed 'BADGRS' — Blue And Dusty Gas Rich Sources (examples shown above). BADGRS contain only 5% of the stars in the local Universe, but 35% of the dust, and over 50% of the atomic gas. Their dust is very cold (12—16 K), and absorbs an exceptionally small fraction of their stellar emission. BADGRS represent a fascinating intermediate stage in galaxy evolution. They’ve built up a lot of dust very quickly, and are relatively metal-rich (metallicities of 0.5—1.1 solar); however, they are still early in the process of converting their gas into stars, unlike most commonly-studied galaxies.

Resolved component separation of the Crab Nebula as it appears at 160 μm (published in Gomez et al., 2012), showing the synchrotron (left), warm dust (centre), and cool dust (right) emission. This was the first ever map of the distribution of cold dust manufactured within a supernova remnant.

I also have an active interest in evolved stars, following on from work I carried out for my PhD thesis (also published in Gomez et al., 2012). I used Herschel data to perform a resolved component separation of the far-infrared and submillimetre emission of three supernova remnants, including the Crab Nebula. My resolved component separation for the Crab (shown above) generated the first ever map of the distribution of cold supernova dust within a supernova remnant. This map showed the dust lies protected within the Crab's dense filaments, proving that it was manufacted by the Crab, and showing that the dust will survive to be injected into the Galactic environment — the first remnant for which this can be said.

Clark, C.J.R., 2015, On the Origins of Cosmic Dust and the Evolution of Nearby Galaxies with the Herschel Space Observatory, PhD thesis

Davies, J.,I., et al., 2019, DustPedia: the relationships between stars, gas, and dust for galaxies residing in different environments, A&A 626 A63

Nersesian, A., et al., 2019, Old and young stellar populations in DustPedia galaxies and their role in dust heating, A&A 624 A80

Below is a selection of the talks and posters I have presented at conferences, workshops, seminars, etc. The full PDF for each presentation can be accessed by clicking on the corresponding image. 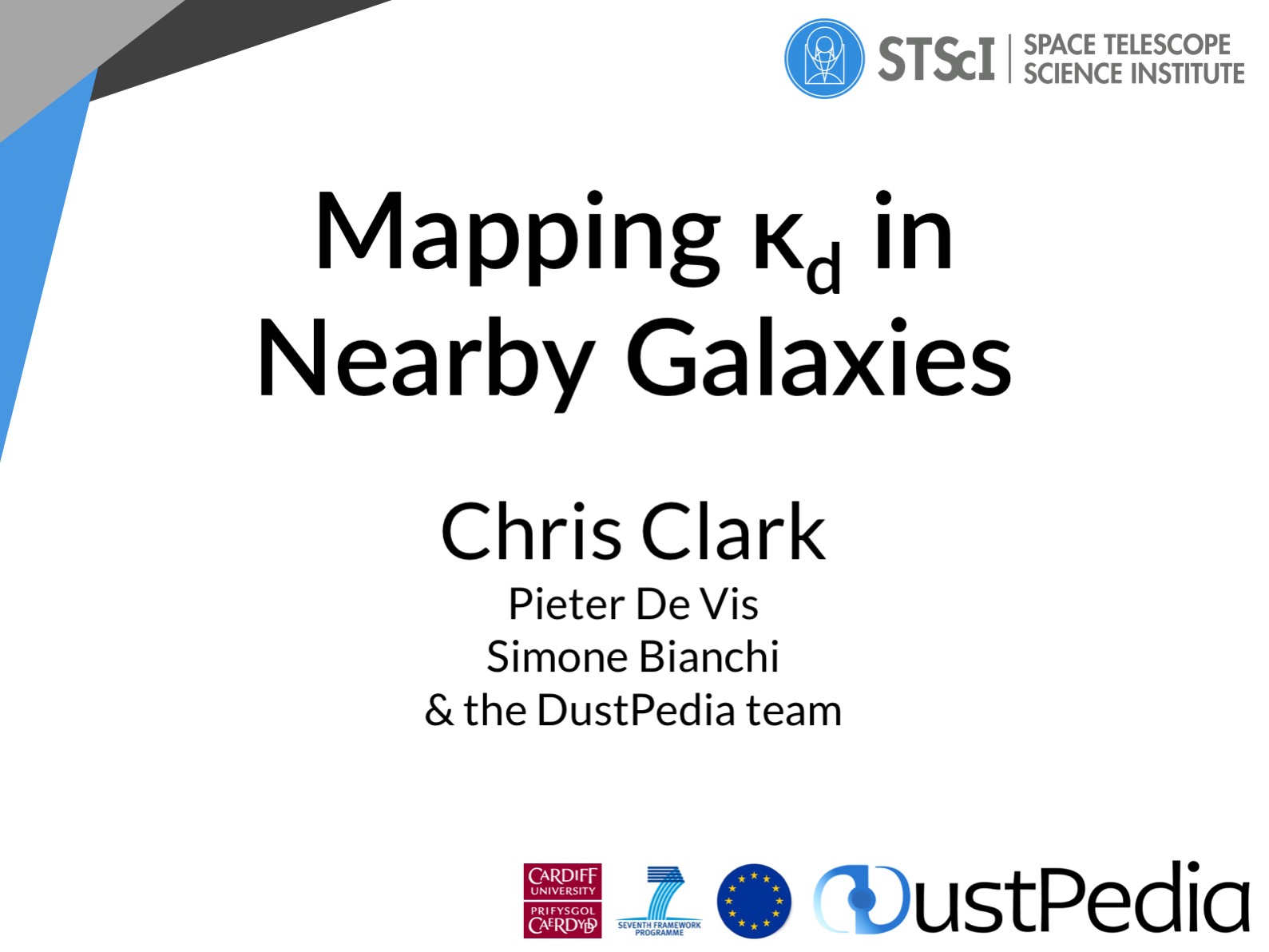 "Mapping κd in Nearby Galaxies"; given as a seminar at University College (2019) and at the East Asian Observatory (2019); abridged version presented as talk at "Cosmic Dust - Origin, Applications, and Implications" conference (Copenhagen, 2018), and "Linking the Milky Way and Nearby Galaxies" conference (Helsinki, 2019). 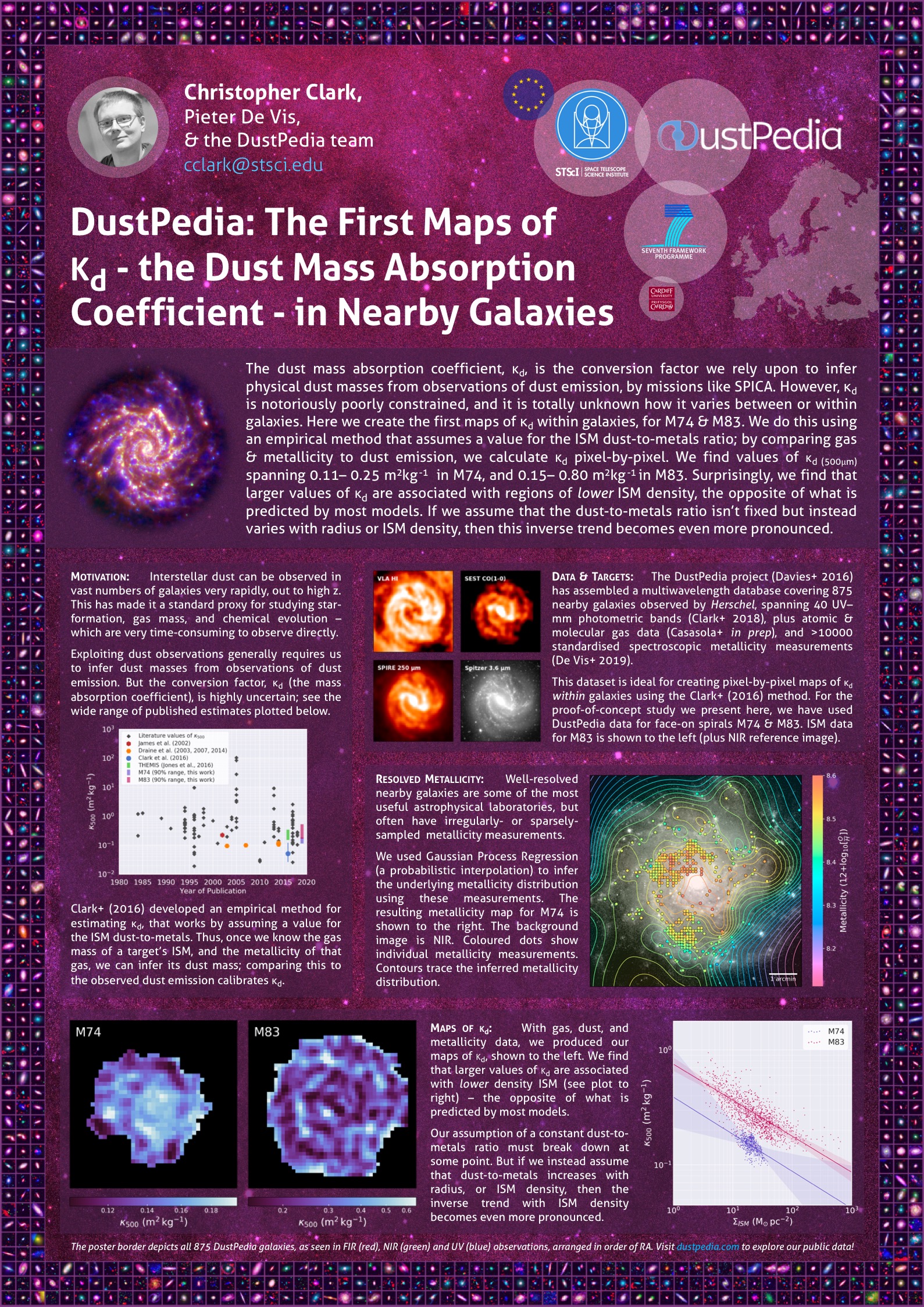 "DustPedia: The First Maps of κd - the Dust Mass Absorption Coefficient - in Nearby Galaxies"; poster presented at "Galaxy Evolution in the Era of Large Facilities" symposium (EWASS, Liverpool, 2018), "The Promise of SPICA" conference (Crete, 2019), and "Linking the Milky Way and Nearby Galaxies" conference (Helsinki, 2019) 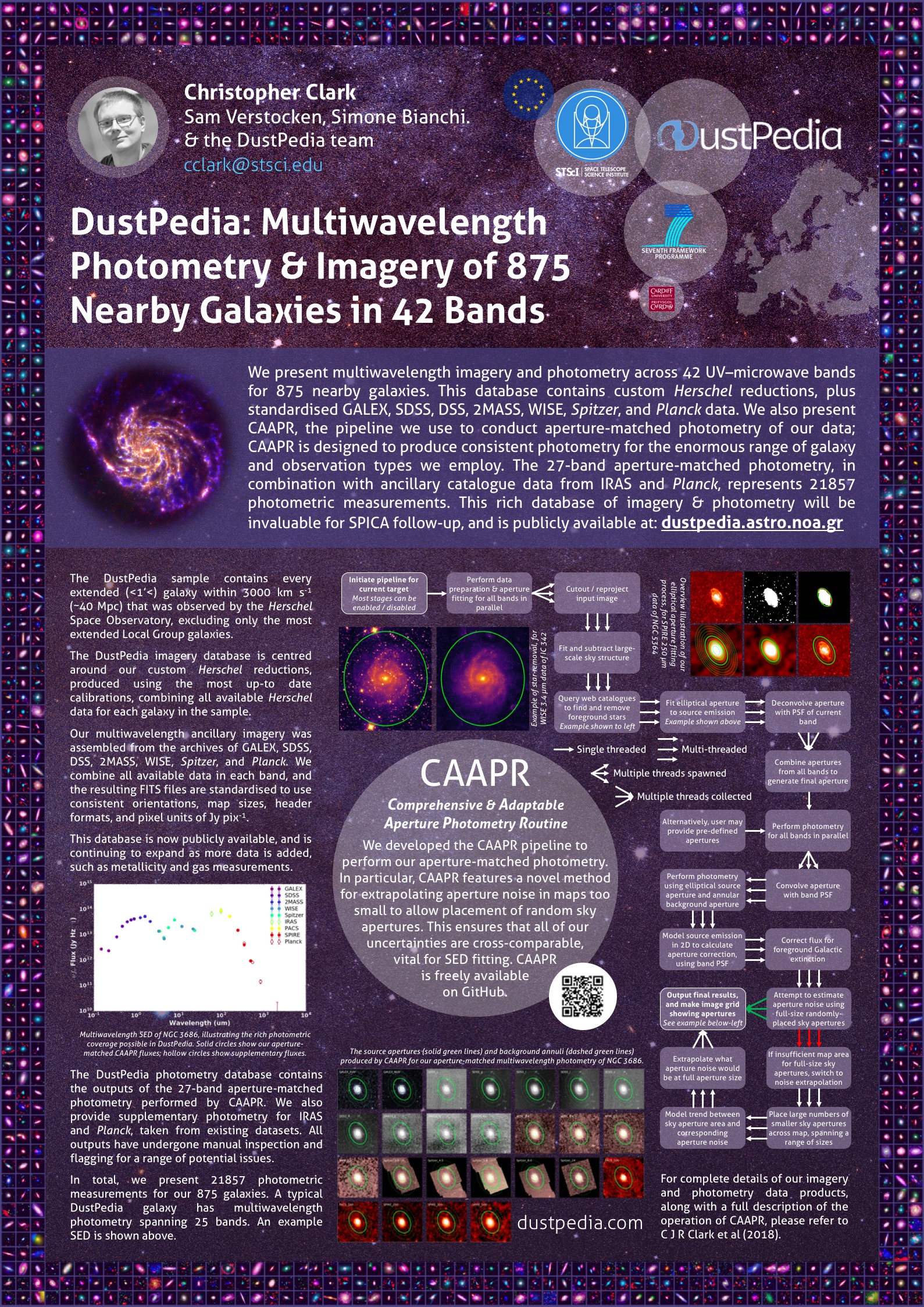 "DustPedia: Multiwavelength Photometry and Imagery of 876 Nearby Galaxies in 42 Ultraviolet–Microwave Bands"; poster presented at "The ISM as a Window Onto Galaxy Evolution" symposium (EWASS, Liverpool, 2018), "Dusting The Universe" conference (Tucson, 2019), "The Promise of SPICA" conference (Crete, 2019), and "Linking the Milky Way and Nearby Galaxies" conference (Helsinki, 2019) 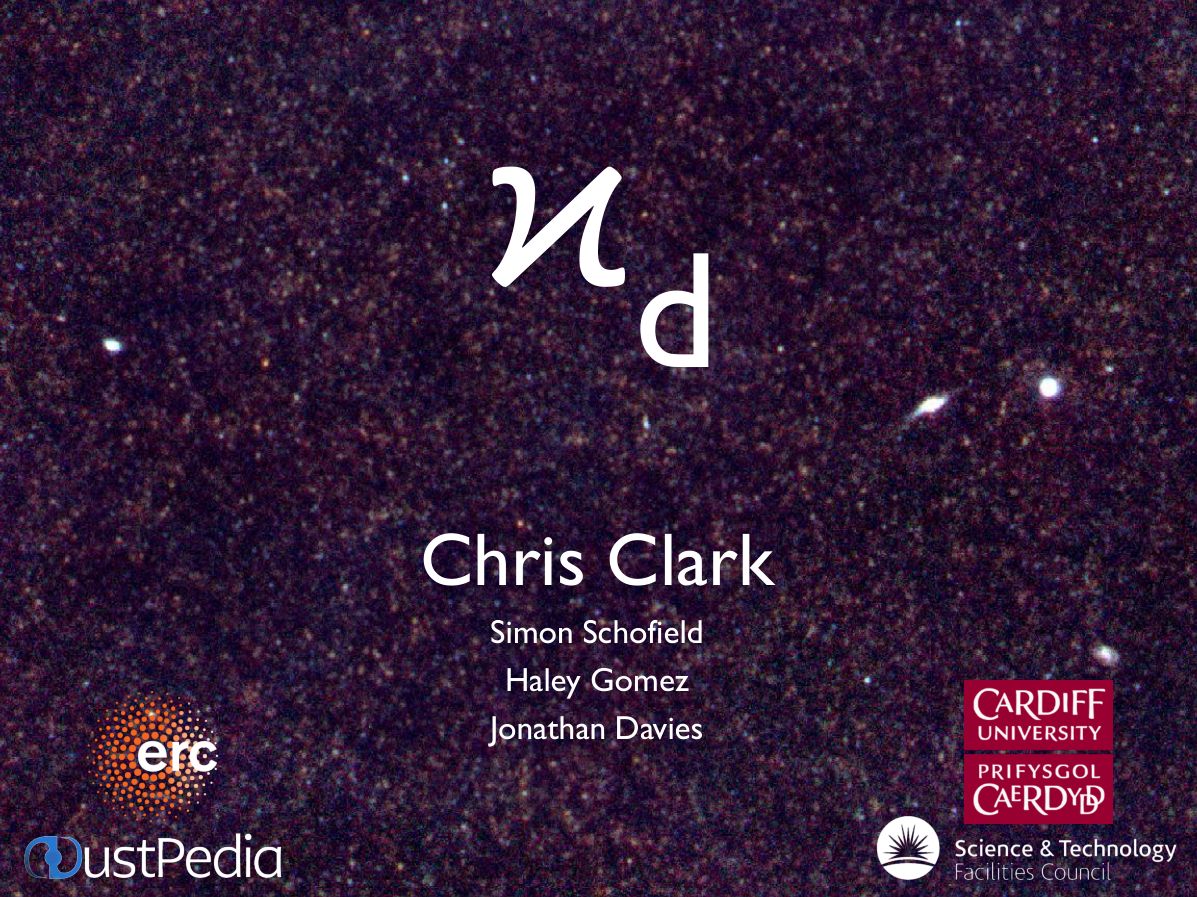 "The Guilty Secrets of Dust in Nearby Galaxies", two-part seminar given to the East Asian Observatory (2017). 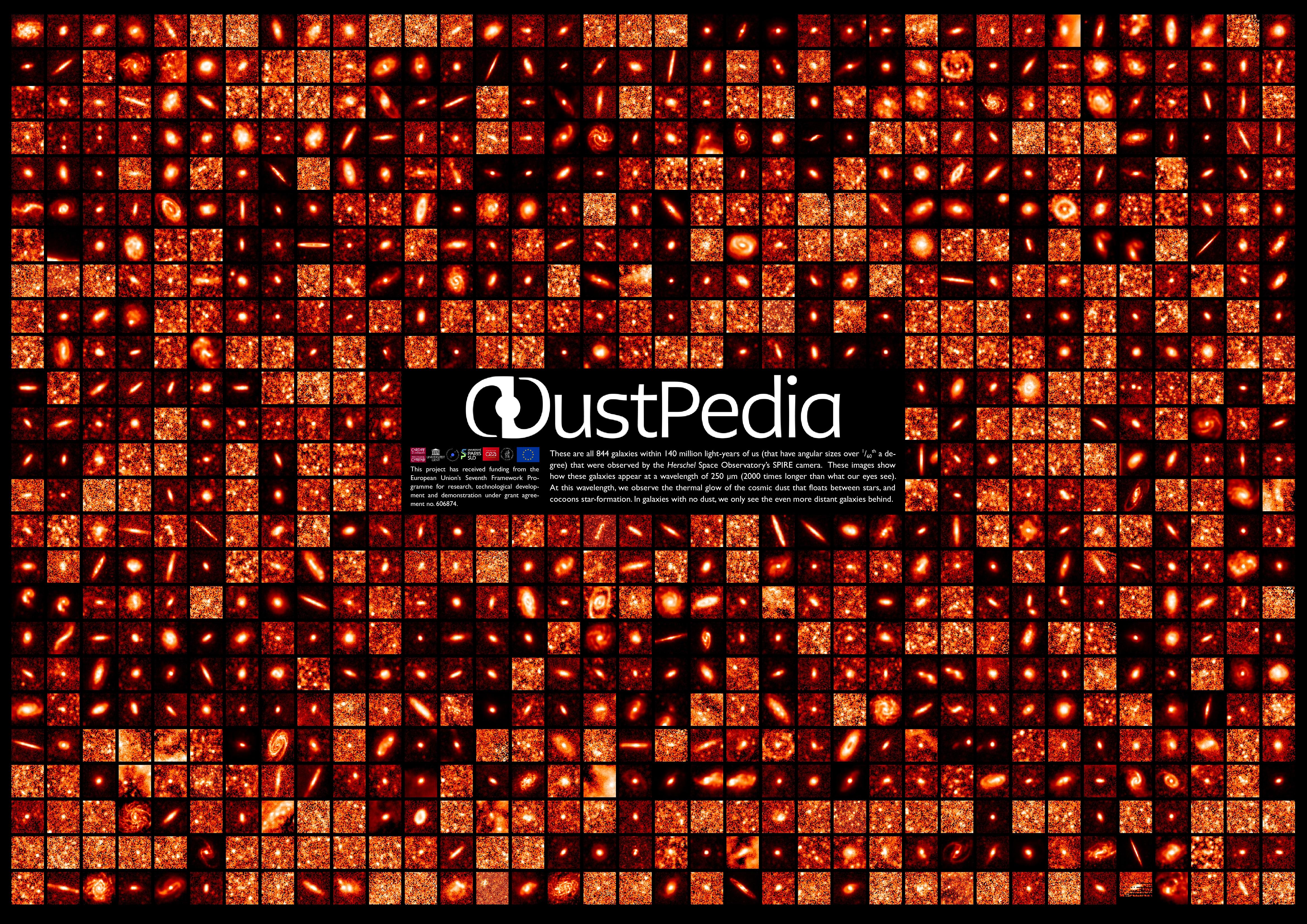 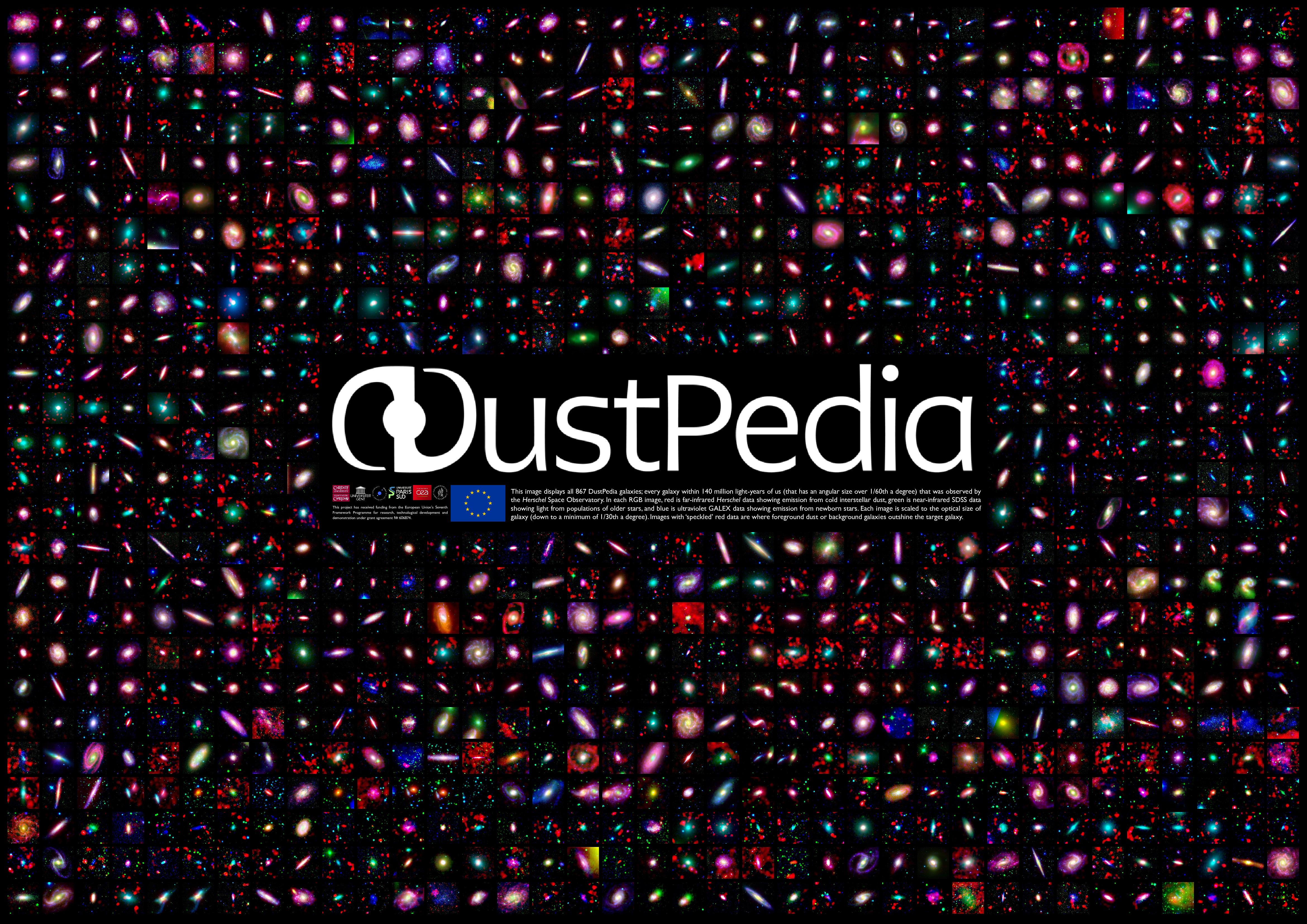 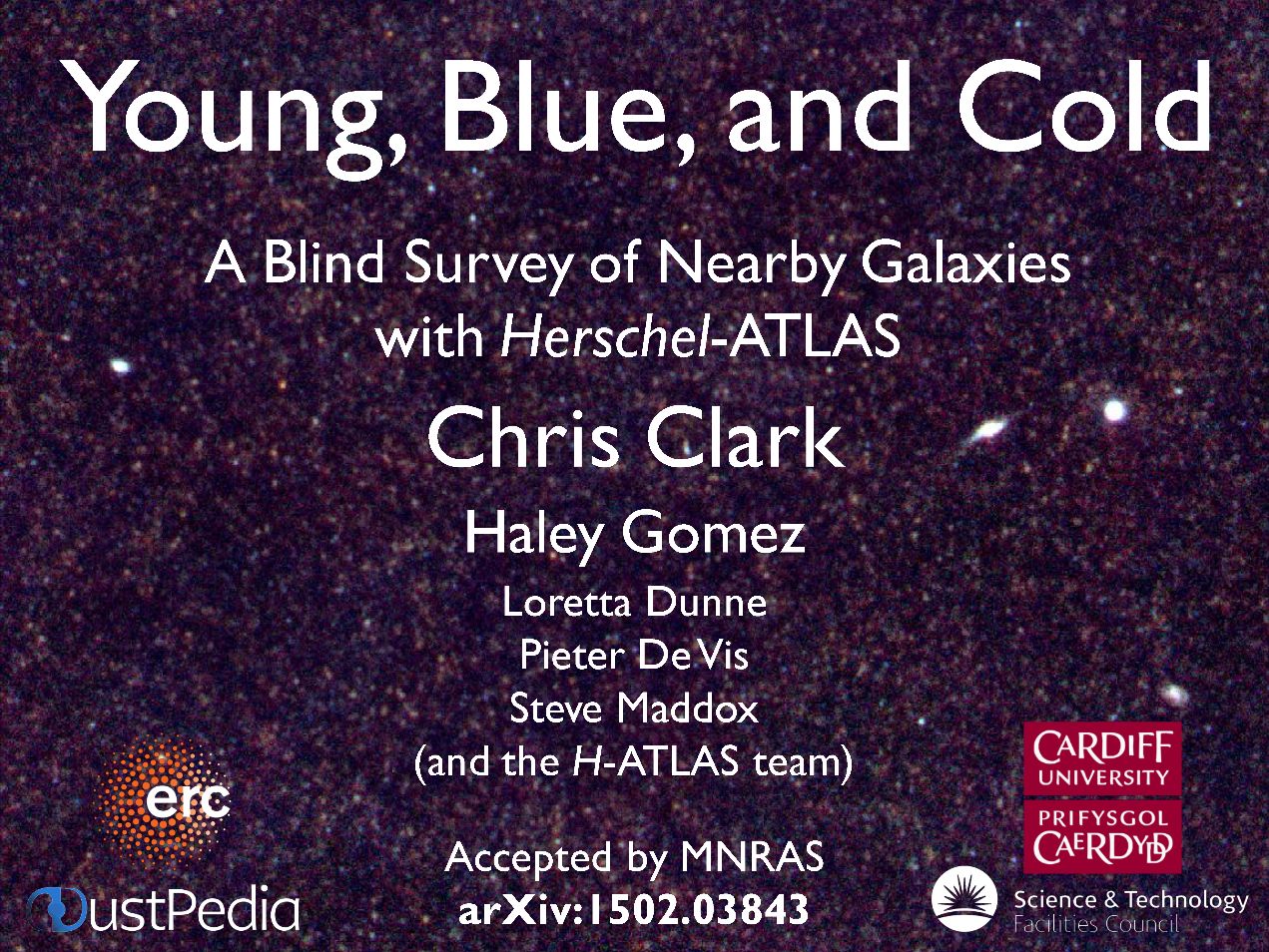